In Memory of Richard Twiss 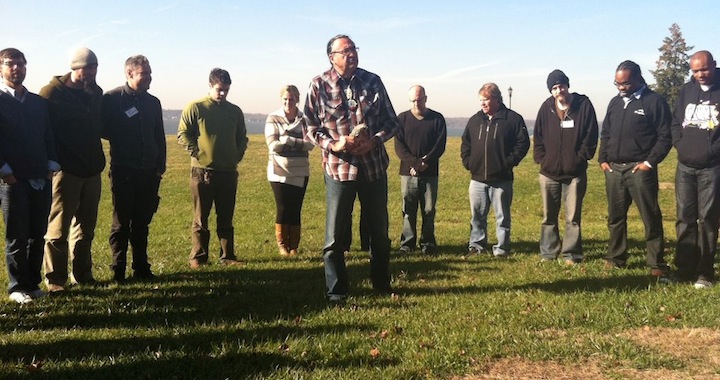 Last Saturday, Feb. 9, Richard Twiss, a prophetic voice for justice on behalf of indigenous peoples around the world, passed away after suffering a massive heart attack on Wednesday night. A member of the Sicunga Lakota Oyate from the Rosebud Sioux Reservation, Richard dedicated his life to fighting systems of economic, cultural, and theological injustice that oppressed Native American and First Nations people. In 1998, he and his wife Katherine founded Wiconi International, which works “for the well-being of our Native people by advancing cultural formation, indigenous education, spiritual awareness and social justice connected to the teachings and life of Jesus, through an indigenous worldview framework.”

In 2009, Co-Director Kent Annan previously profiled Richard and other Native American Christians working for justice and cultural liberation in Sojourners Magazine. This week, he wrote the following in response to news of his death:

“Richard was an inspiring person to be around. He had wrestled with God — or maybe, walked with God but wrestled hard with those who follow Jesus in a way that led to oppressing others. He was funny, insightful, kind. John and I were together with him at a small retreat convened by Tony Campolo in December. I’d got to know Richard a little at these retreats, as well as when I wrote that article about him and several other Native American and First Nations leaders some years ago. The retreat closed with about fifty of us standing outside in a circle beside a lake. A beautiful, crisp day. Richard then went in a circle blessing each of us — and all of us — in the name of Jesus in a way that was rooted deeply in his Native American tradition. It was a moving experience to be blessed by him, blessed by God. All the more so in retrospect. Richard will be deeply missed by his family and close friends. But also deeply missed by acquaintances like us. He spoke insightfully, importantly about how we’re to work across cultures. Richard, John, and I talked about our mutual experiences of taking short-term cross-cultural trips. Jonathan and I had talked about inviting Richard to come and speak to our Micah Scholars during our annual retreat. Richard’s life, love, and work will keep rippling out as the wrestling has now ended and he walks with his Creator. We’re grateful for his faithfulness.”

Educate and Celebrate! Food, Wine and Art Auction.General
Because We AreGeneral